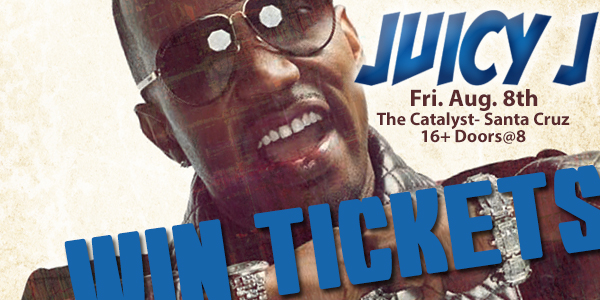 It’s time to GET  TRIPPY with rapper Juicy J live in concert at The Catalyst in Santa Cruz on Friday, August 8th at 8pm.

It’s the Never Sober Tour, a 16 and over show that gets to the heart of Juicy J.  A founding member of the Southern hip hop group Three 6 Mafia established in 1991, Juicy J recently announced he was part-owner and A&R rep for Wiz Khalifa’s Taylor Gang Records.  He just signed a solo deal with Columbia Records and released Stay Trippy, his third studio album under this new labels.

We’ve got your tickets and there are three ways to get in to win.

1)  Fill out the entry form below.

3) Watch our Facebook page for more opportunities to win

If you don’t win tickets, you can still get them at The Catalyst.  Go to catalystclub.com for more information